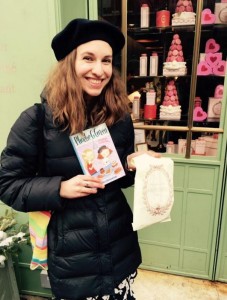 is originally from Dearborn, MI, having come to New York in 2006 to attend college at the Gallatin School of Individualized Study at NYU. She joined The Art Mob in fall 2010, shortly after graduation, and first performed in the “Out of Our Element” concert that winter. Her favorite Mob genres of music are Appalachian folk songs and merry, bucolic Victorian-era songs with corny lyrics.

Hannah has been involved in choral singing all her life, and she has performed in many notable local and international venues, most recently with the New York-based a cappella group Khorikos. She has also dabbled in other forms of music, such as rock drumming and a bit of clarinet and ukulele, but has decided she’s better off singing.

When she’s not making music and arranging songs for the Mob, Hannah works as a production editor at Henry Holt/Macmillan Publishing Company. She lives in Astoria with her delightful boyfriend, Chris.