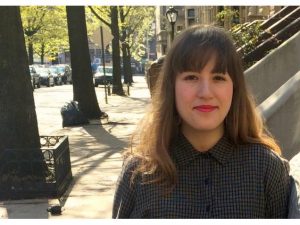 Amanda Keating lives in Brooklyn and is a playwright. Her plays include RETREAT (Ensemble Studio Theatre and Two Headed Rep), TARTUFFE (Two Headed Rep), GO THAT WAY (Williams College Summer Theatre Lab), ROAST (The Plowmen), OF SOLITUDE, and The Cleanup Crew. She is a member of EST/Youngblood, and her short plays have been produced by Samuel French, EST, Serials @The Flea, Tiny Rhino, the Suffield Players, and Rule of 7×7.

Her play, this movie, was a winner in the 2017 Samuel French OOB Festival. An alumna of The MacDuffie School, Williams College, and the National Theater Institute, Amanda grew up in Western Massachusetts and her best friend is a cat named Wilbur. She is the Literary Manager of Two Headed Rep. She joined The Art Mob in 2017.